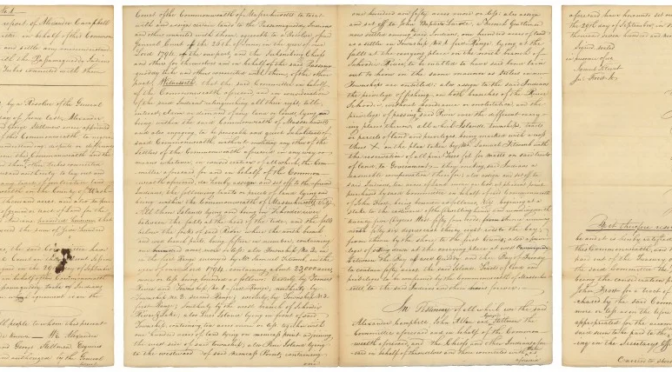 Treaty between the Passamaquoddy Tribe & The Commonwealth of Massachusetts 1794

RESOLVE on the report of Alexander Campbell and others, a committee in behalf of this Commonwealth, to negotiate and settle any misunderstanding or difference with the Passamaquoddy Indians and those of the other tribes connected with them.

Whereas, by a resolve of the general court passed on the 26th day of June last, Alexander Campbell, John Allan and George Stillman were appointed a committee, in behalf of this Commonwealth, to negotiate and settle any misunderstanding, dispute or difference which may subsist between this Commonwealth and the Passamaquoddy Indians and those of other tribes connected with them, with full power and authority to lay out and assign to the said Indians, any track of unlocated land belonging to this Commonwealth, in the County of Washington, not exceeding ten thousand acres, and also to purchase any particular spot of ground or tract of land for the use and convenience of said Indians, provided, however, that such purchase shall not exceed the sum of five hundred pounds.

And whereas, the said committee have exhibited to the general court, in their present session, an agreement made and signed on the 29th day of September last, by and between them in behalf of this Commonwealth, and the chiefs of the Passamaquoddy tribe of Indians and others connected with them, which agreement is in the words following, to wit:

To all people to whom this present agreement shall be made known, we Alexander Campbell, John Allan and George Stillman, Esquires, a committee appointed and authorized by the general court of the Commonwealth of Massachusetts, to treat with and assign certain lands to the Passamaquoddy Indians and others connected with them, agreeable to a resolve of said general court, on the twenty-sixth of June, in the year of our Lord, one thousand seven hundred and ninety-four, of the one part, and the subscribing chiefs and others for themselves, and in behalf of said Passamaquoddy tribe and others, connected with them, of the other part: witnesseth, that the said committee, in the behalf of the Commonwealth aforesaid, and in consideration of the said Indians relinquishing all their right, title, interest, claim or demand, on any land or lands lying and being within the said Commonwealth of Massachusetts; and also engaging to be peaceable and quiet inhabitants of said Commonwealth, without molesting any other of the settlers of the Commonwealth aforesaid in any way or means whatever: in consideration of all which, the committee aforesaid for and in behalf of the Commonwealth aforesaid, do hereby assign and set off to the aforesaid Indians, the following tract or parcel of land lying and being within the Commonwealth of Massachusetts, viz: all those islands lying and being in Schoodic River, between the falls at the head of the tide, and the falls below the forks of said river where the north branch and west branch parts; being fifteen in number, containing one hundred acres more or less: also Township No. 2 in the first range surveyed by Mr. Samuel Titcomb, in the year of our Lord, one thousand seven hundred and ninety-four, containing about twenty-three thousand acres more or less; being bounded as follows, easterly by Tomer’s River and Township No. One first range: northerly by Township No. Two second Range: westerly by Township No. Three first range; southerly by the west branch of Schoodic River and Lake; and also Lire’s Island lying in front of said township, containing ten acres more or less; together with one hundred acres of land lying on Nemcass Point adjoining the west side of said township; also Pine Island lying to the westward of said Nemcass Point, containing one hundred and fifty acres, more or less; also assign and set off to John Baptist Locote, a French gentleman, now settled amoung the said Indians, one hundred acres of land, as a settler in Township No. One first range, lying at the falls at the carrying place on the north branch of Schoodic River, to be entitled to have said land laid out to him in the same manner as settlers in new townships are entitled; also assign to said Indians the privilege of fishing on both branches of the river Schoodic without hinderance or molestation and the privilege of passing the said river over the different carrying places thereon; all which islands, townships, tracts or parcels of land and privileges being marked with a cross, thus X, on the plan taken by Mr. Samuel Titcomb, with the reservation of all pine trees fit for masts on said tract of land to government; they making said Indians a reasonable compensation therefor; also assign and set off to said Indians ten acres of land more or less at Pleasant Point, purchased by said committee in behalf of said Commonwealth, of John Frost, being bounded as follows, viz: beginning at a stake to eastward of the dwelling house, and running north twenty-five degrees west fifty-four rods; from thence running north fifty-six degrees east thirty-eight rods to the bay; from thence by the shore to the first bound; also a privilege of setting down at the carrying place at West Quoddy between the Bay of West Quoddy and the bay of Fundy, to contain fifty acres. The said islands, tracts of land and privileges to be confirmed by the Commonwealth of Massachusetts to the said Indians and their heirs forever. In testimony of all which, we, the said Alexander Campbell, John Allan and George Stillman, the committee aforesaid, and in behalf of the Commonwealth aforesaid, and the chiefs and other Indians aforesaid, in behalf of themselves and those connected with them as aforesaid, have hereunto set our hands and seals at Passamaquoddy, the twenty-ninth day of September, in the year of our Lord one thousand seven hundred and ninety-four.

Signed and sealed in presence of:

Be it therefore Resolved, That the said agreement be and it is hereby ratified and confirmed, on the part of the Commonwealth, and that there be allowed and paid out of the treasury of this Commonwealth, to the said committee, the sum of two hundred pounds, being the consideration paid to the above named John Frost, for a tract of land on Pleasant Point, purchased by the said committee, ten acres of which more or less, as in the before recited agreement, is hereby appropriated for the accommodation of the said Indians, said sum to be paid to the said committee, on their depositing in the secretary’s office a deed from the said John Frost, of the said tract of land on Pleasant Point, duly executed and acknowledged: and, whereas, there now remains for the disposition of government, ninety acres more or less of the above mentioned lot of land, on Pleasant Point.

Resolved, that the treasurer of this Commonwealth be and he is hereby authorized and empowered, to lease the said remaining ninety acres for one year or for term of years, in such manner and on such consideration, as he may judge will be most for the advantage of the Commonwealth.